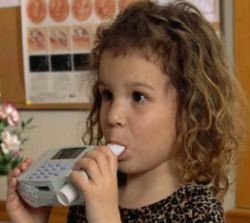 What is a spirometer and spirometry?

A spirometer is a device which measures the amount of air that you can blow out. There are various spirometer devices made by different companies, but they all measure the same thing. They all have a mouthpiece that you use to blow into the device.

How is it done?

A clip may be put onto your nose to make sure that no air escapes from your nose. The above routine may be done two or three times to check that the readings are much the same each time you blow into the machine.

What does the spirometer measure?

The most common measurements used are:

What can the measurements show? 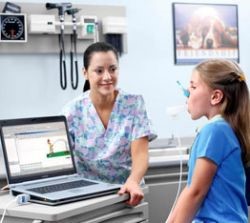 A spirometry reading usually shows one of four main patterns:

Normal readings vary, depending on your age, size, and sex. The range of normal readings are published on a chart.
An obstructive pattern – typical of diseases that cause narrowed airways
If your airways are narrowed, then the amount of air that you can blow out quickly is reduced. So, your FEV1 is reduced and the ratio FEV1/FVC is lower than normal. As a rule, you are likely to have a disease that causes narrowed airways if:

The main conditions that cause narrowing of the airways and an obstructive pattern of spirometry are asthma and chronic obstructive pulmonary disease (COPD). So, spirometry can help to diagnose these conditions. Spirometry can also help to assess if treatment (inhalers etc) ‘open up’ the airways as the readings will improve if the narrowed airways become wider. As a guide, the following values help to diagnose COPD and its severity:

With a restrictive spirometry pattern your FVC is less than the predicted value for your age, sex and size. This is caused by various conditions that affect the lung tissue itself, or affect the capacity of the lungs to expand and hold a normal amount of air. For example, conditions that cause fibrosis or scarring of the lung such as pneumoconiosis. Or, a physical deformity that restricts the expansion of the lungs. Your FEV1 is also reduced but this is in proportion to the reduced FVC. So, with a restrictive pattern the ratio of FEV1/FVC is normal.

With this you may have two conditions, for example, asthma plus another lung disorder. Also, some lung conditions have features of both an obstructive and restrictive pattern. For example, with cystic fibrosis there is a lot of mucus in the airways which causes narrowed airways, and damage to the lung tissue may also occur.

Is spirometry the same as peak flow readings?

No. A peak flow meter is a small device that measures the fastest rate of air that you can blow out of your lungs. Like spirometry, it can detect airways narrowing. It is more convenient than spirometry and is commonly used to help diagnose asthma. Many people with asthma also use a peak flow meter to monitor their asthma. For people with COPD, a peak flow reading may be useful to give a rough idea of airways narrowing, but it can underestimate the severity of COPD. Therefore, spirometry is a more accurate test for diagnosing and monitoring people with COPD.

What preparation is needed before having spirometry?